From 2001-2010, Southeast Venture’s third decade was focused on expanding services, such as brokerage, and bringing the firm to the next level, including recommitting its resources to development-owned projects. Despite the Great Recession, leadership made strategic decisions that brought the firm through stronger than ever.

Here are a few key company milestones during this second decade:

Southeast Venture breaks ground on the building for the Tennessee Department of  Labor. Located in MetroCenter, it is the company’s largest development project to date. The 249,000-square-foot building was completed in 2007. 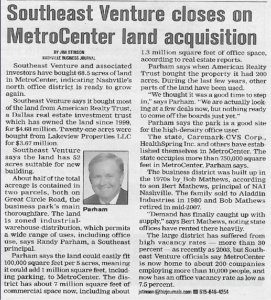 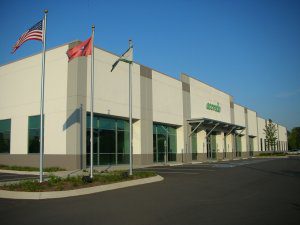 In the same year, Southeast Venture breaks ground on a build-to-suit project for Accredo Health in MetroCenter. The 50,000-square-foot building was completed in 2008.

Southeast Venture breaks ground on Healthspring’s office campus in MetroCenter (pictured above), which is meant to consolidate Healthspring’s organization from three separate buildings across MetroCenter. The new campus can accommodate about 1,000 employees. Delivered in two phases, the more than 171,000-square-foot development was completed in 2012. This project won the 2012 NAIOP Office Development of the Year and was also the main reason that Southeast Venture won a 2011 NAIOP Developer of the Year award.

Stay tuned to learn about Southeast Venture’s most recent decade!