Once an industrial area filled with warehouses, factories and garages in a rundown part of town rarely visited, Wedgewood-Houston has experienced a redevelopment renaissance over the last few years as artists and creatives have flocked to the area. Two miles south of downtown, Wedgewood-Houston (AKA WeHo) boasts lower rent and housing prices relative to the nearby neighborhoods of the Gulch, 12South, and Belmont.

The area’s history dates back to the American Civil War. It’s home to Fort Negley, the largest fortification built by the Union after the fall of Nashville in 1862. The abandoned Greer Stadium, the former home of the Nashville Sounds with its guitar-shaped scoreboard, sits just south of the site.

The most historic building still standing in the neighborhood is the Merritt Mansion on Humphreys Street, purchased a few years ago and converted into a recording studio by Nashville-based rock band Kings of Leon. The home was built in 1840 for Sally Merritt, the youngest daughter of Captain John Rains, and her husband, Gibson. Rains reached Nashville with James Robertson on Christmas Day, 1779, and purchased a 640-acre farm in the neighborhood.

Many of the neighborhood’s most notable restaurants and businesses embrace the area’s industrial history: Award-winning restaurant and bar Bastion is in a former jam factory; Dozen Bakery resides in a former truck repair shop; and David Lusk Gallery is in the building of a former truck mechanic. Other can’t-miss WeHo restaurants include Santa’s Pub, with its year-round Christmas decorations and top-notch karaoke, as well as Gabby’s, Clawson’s Pub & Deli and Smokin’ Thighs. 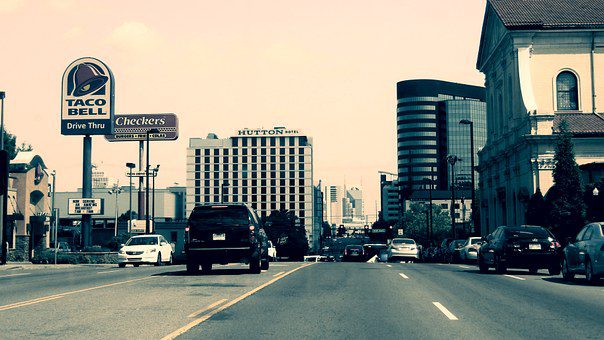 WeHo is also all about the arts. Popular among residents and visitors is the robust variety of art galleries and creative spaces located within a few blocks of each other. Some credit the David Lusk Gallery on Hagan Street, which opened in 2014, as the spark for the recent influx of redevelopment. In addition to David Lusk are Zeitgeist, Hunter + Gatherer, Sherrick & Paul and Julia Martin Gallery, all of which participate in the free monthly art walk. Named Arts & Music at Wedgewood-Houston, the event is held the first Saturday of each month, coinciding with the Downtown First Saturday Art Crawl. There are also multiple spaces for independent artists and creatives to set up shop, including in Fort Houston and the May Hosiery Co-Op complex, which is currently undergoing a major overhaul. The redeveloped complex, which contains multiple masonry buildings, will eventually include 80,000 square feet of office space, three restaurants, seven retail storefronts, rooftop space and a possible hotel.

Unique to the area is the prevalence of live-work housing, with a retail component on the first floor and a loft or living area on the second floor. New homes are also popping up as developers take advantage of the lower cost of land, and home prices are rapidly on the rise as the neighborhood continues to gain popularity.

We look forward to seeing what is next in store for the up-and-coming Wedgewood-Houston neighborhood.