This press release was originally released on Oct. 20, 2016.

Will Break Ground for First Building in Early 2017 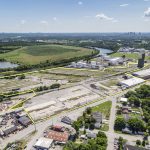 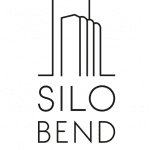 NASHVILLE, Tenn., Oct. 20, 2016 – Southeast Venture, developers of a 37.7-acre mixed use real estate development on Centennial Boulevard in The Nation’s neighborhood, announced today the name of the project: Silo Bend.

“The first thing everyone notices about this property is the 200-foot-tall abandoned concrete grain silo in the middle of the site, which was used years ago by the Gillette Grain Company. It’s quite impressive. In fact, it is featured in a video series by artist Brian Siskind called ‘The Nations Life,’” said Southeast Venture Principal Wood Caldwell.

(To see the video series, search for ‘the nations life’ on YouTube or set your browser to https://www.youtube.com/watch?v=gp8ks048vDk. Video credit: Brian Siskind/Those Drones, LLC)

“The silo can be see from miles away – including from the upper floors of downtown buildings – and it is by far the tallest structure in The Nation’s neighborhood. The owner had planned to incorporate it into this development from the beginning, so it is natural that this landmark would be integral to the brand. In addition to using the word ‘silo’ in the name, the logomark is a line drawing of the silo,” Caldwell added. “The second word in the name refers to the fact that this development is across from a bend of the Cumberland River.”

The new name will be officially unveiled this Saturday at Light The Nations 615 festival, of which Silo Bend is a title sponsor. Running from 4 to 10 p.m., the event will take place on 51st Avenue between Georgia and Illinois avenues. It will feature local businesses, art, vendors, food trucks and live entertainment, including musical acts Kree Harrison, Moon and Forty-Two and Tommy Hans. To learn more, go to lightthenations615.com.

Centered at the intersection of Centennial Boulevard and New York Avenue, Silo Bend extends from Centennial to the southern bank of the Cumberland River. When complete, Silo Bend will include single-family homes, apartments and retail stores. The property is owned by R. Manuel Cenntennial.

Caldwell said he expects ground to be broken for the first building – a 193-unit apartment building – by the first quarter of 2017. Southeast Venture is architect for Silo Bend, Barge Cauthen & Associates is the civil engineer, Hodson Douglas is the landscape architect and RPM Transportation is providing the traffic analysis and transportation plan.