SoBro, a riff on New York City’s SoHo neighborhood and first coined by the Nashville Scene in the 1990s, is derived from the location of  this rapidly developing downtown district that is SOuth of BROadway.

The “official” boundaries of SoBro, per the Downtown Zoning Code developed by the Metro Planning Department, extend east–west from the Cumberland river to the Gulch and north–south from Broadway to Peabody Street. The “man on the street” definition of SoBro, however, pushes the southern boundary to I-40, encompassing what the Planning Department calls the Lafayette Subdistrict.

This area was once known for the black mud and filthy water that flooded the streets, but it’s now home to some of Nashville’s most popular tourist attractions and crowded restaurants.

The History of “Black Bottom”

In the late 1800s, SoBro was basically the exact opposite of what it is today: dirty, poverty stricken and crime ridden. It was called Black Bottom, most likely because this flood-prone district was laden with dirty flood water and dark black mud, unlike normal clay or dirt you might find in an underdeveloped area. But because the term appeared shortly after the end of the Civil War, many rumored the name was due to the large number of African Americans living in the area. Even though racism was at its height, the geographical features are the commonly accepted reason for the term.

Regardless, Black Bottom was a low point in Nashville — not just physically lower in altitude, but teaming with  saloons, brothels, outdoor bathrooms and coal-heated homes that left a coating of black soot everywhere.

Interestingly, Rutledge Hill, the next district over from Black Bottom, was the one of the most affluent neighborhood at that time – although the two seamlessly flow together today. 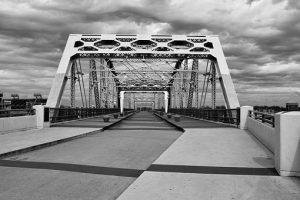 By 1907, the city of Nashville decided it was time to eliminate Black Bottom as they knew it. The Shelby Street Bridge (today christened the John Seigenthaler Pedestrian Bridge), built in 1912, began the process as new construction and business activity were used as ammunition to develop the neighborhood.

The district’s redevelopment reached a peak from 1950–1970 with construction projects, efforts to broaden streets and campaigns to build highways.

The birth of SoBro

The up-and-coming district became known as SoBro during a city-wide debate to build a six-lane road through downtown (You can ponder whether or not that road was built the next time you drive down Korean Veterans Boulevard).

Major development in SoBro began in 1996 (about the time the Scene coined the name) with the construction of the Bridgestone Arena. Development began picking up steam in 2000 when the the first major hotel in SoBro, the Downtown Hilton, opened next to the arena. The next year, the Country Music Hall of Fame and Museum moved from Music Row to SoBro. Two years later, construction began on the crown jewel of SoBro, the Schermerhorn Symphony Center, the opening of which in 2006 signalled the “arrival” of SoBro as a downtown district with huge potential — a reputation that was cemented in 2010 with the groundbreaking for the massive Music City Center.

Since the Music City Center and Koreans Veterans Boulevard opened in 2013, SoBro has grown exponentially. The neighborhood is a popular destination for tourists and locals because of the attractions within its boundaries, but also due to the boom occuring in the neighboring vicinities of Broadway and the Gulch.

SoBro: Where to eat, drink and play 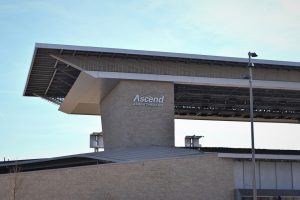 If you find yourself in the neighborhood, be sure to check out The Green Pheasant, The Southern, Etch or Bakersfield for great local eateries, while Tennessee Brew Works, Pinewood Social and FGL House are fun options to grab a drink. The Country Music Hall of Fame and Museum, Ascend Amphitheater and the Schermerhorn Symphony Center celebrate all that Music City has to offer by providing one-of-a-kind entertainment.

This is just a start to the expansive list of places to visit in SoBro. While we probably wouldn’t have suggested that you enjoy an afternoon there 130 years ago, we certainly recommend it now.