This is our last post detailing the results of our CRE survey. Responders were asked to predict how each sector of Middle Tennessee commercial real estate will preform in 2012 compared to 2011. 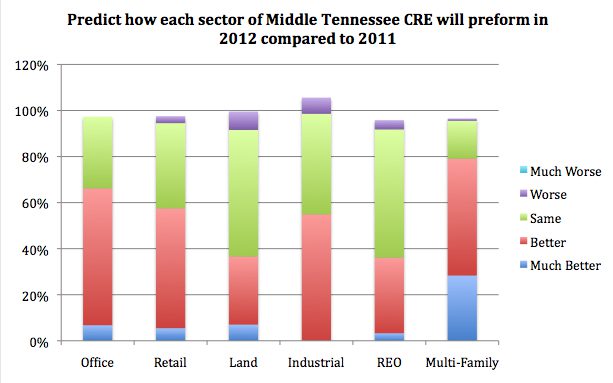 Commercial real estate insiders are least optimistic about the land and industrial sectors, with eight and seven percent, respectively, of responders banking on a worse performance in 2012 compared to 2011.

When compared to other sectors, the outlook for land sales looks a bit less promising, but when put into the context of last year’s survey, optimism appears to be rising slightly in this sector. Last year, only 24 percent of survey takers felt that the land sector would perform better or much better than 2010. This year, that statistic has jumped 13 percent to 37.

A majority (56 percent) of responders believe that the real estate-owned (REO) sector will remain constant in 2012.

Check out the 2012 Leasing Outlook.